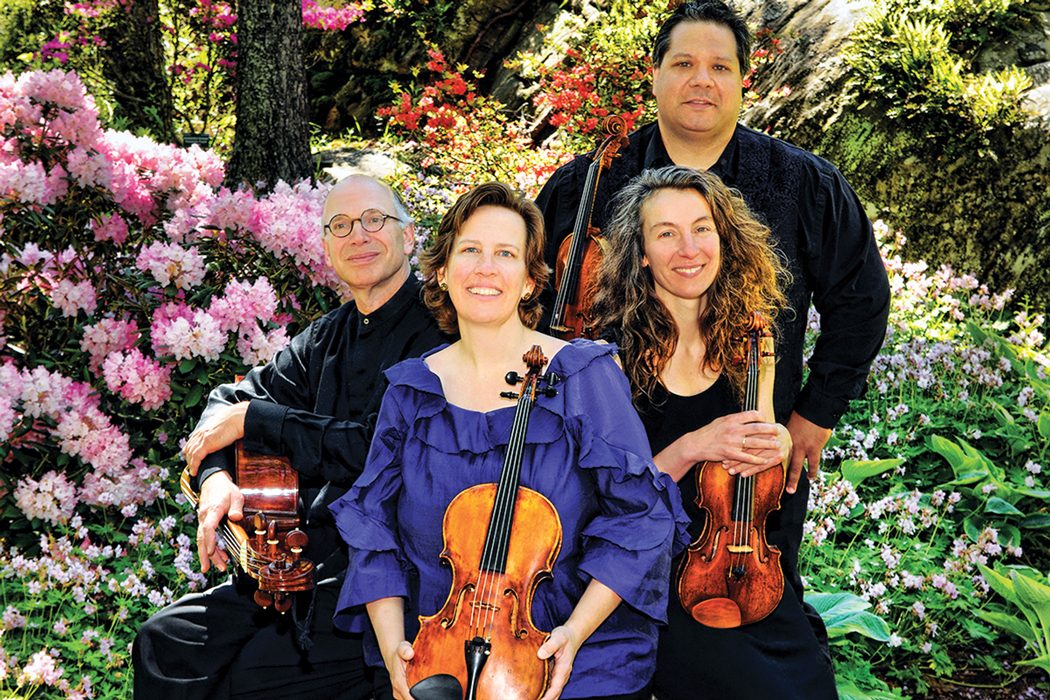 Not long after forming in Philadelphia 28 years ago, the DaPonte Quartet surprised the musical world by moving from a cosmopolitan urban area to rural Maine. The DSQ had been — and continues to be — sought after to perform and teach all over the U.S. and around the world. They have appeared in France, Scotland, Canada, and more than twenty American states. Their performances have been broadcast over nation-wide radio and television programs in both the United States and Canada. They have received awards from the National Endowment for the Arts, the Philadelphia Musical Fund Society, the Music Teachers National Association, Chamber Music America, and have participated in several of the nation’s most prestigious concert series to rave reviews. Musicians and critics alike wondered, why would the DSQ move to Maine, where, as the New York Times noted, they create an experience “like watching the Celtics play in the local gym.”

But the members of the DaPonte String Quartet were proud to call Maine home, and their relationship with mid-coast Maine remains a deeply rooted one. When CBS Sunday Morning nationally televised a profile of the group, the idea of living outside a major urban center suddenly appeared to be an appealing alternative lifestyle few musicians had considered. Few string quartets can boast such a devoted following. The people of Maine warmly embraced the DSQ, which has become an integral part of the state’s musical life. When the Quartet debuted at Carnegie Hall, a large contingent of their fans traveled to New York to hear and cheer them there. The Times wrote in amazement: “Let it not be said that the DaPonte String Quartet enters New York musical life without friends. Weill Hall was packed!” The state’s embrace of the DSQ has also taken the form of awards from the Maine Arts Commission.

This support enables the DSQ to perform a wide-ranging and varied repertoire. While many classical musicians struggling with the realities of the contemporary musical marketplace find themselves performing exclusively new compositions, the Quartet’s repertoire spans the entire history of music, from seventeenth-century works on original instruments to cutting-edge contemporary quartets, like the one written for them by Pulitzer Prize-winning composer David Del Tredici. The DSQ is also known for their inventive interpretations of the works they play. The Boston Globe observed that whatever music they present — be it Renaissance, Baroque, Classical, Romantic, Modern, or Post-Modern — the freshness of the DSQ’s performances make these works appear novel and contemporary: “Once again, the music could have been hot off the presses.” Their performances affirm chamber music as a vital and alive art form.

Fresh conception requires original thought, and the DSQ’s is based on solid research, extensive scholarship, and meticulous preparation. Strings Magazine recently remarked on the inclusion of British composer Thomas Ades’s quartet Arcadiana in the DSQ’s repertoire, noting that few groups would find themselves able to invest the hundreds of hours of preparation required for music of such complexity. This sort of groundwork gives their performances authority, but an authority that isn’t stiff or aloof. Their concerts are dynamic and their stage manner — with one another and with their audiences — is warm and conversational. The Quartet members regularly share musical insights with their audiences before playing and these “spoken program notes” enable the listener to enter into a deeper connection with the music.