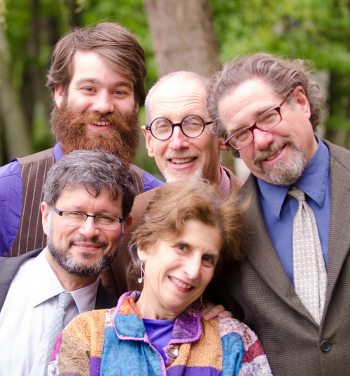 The Casco Bay Tummlers, based in Portland, Maine, have been performing klezmer music since 1988! We have released three recordings and were featured performers on the LL Bean Holiday CD. We also have a dramatic side, creating and performing the music for the world premiere of Manifest at the Portland Stage Company and for a whimsical Belgian documentary, Mon noM.

The Tummlers have a unique sound and a stage performance that features all members of the band. Steve Gruverman brings an extensive background in ethnic dance music to his soulful clarinet playing. Carl Dimow has developed a distinctive klezmer flute style, making the instrument an equal solo voice in the music. John Clark is an incredibly versatile bass player–everything from symphony to surf–perfect for the Tummlers eclectic approach to klezmer. Nancy Hoffman brings a playfulness which audiences love to both her accordion playing and her singing. Peter McLaughlin keeps the traditional role as drummer happening with elements of jazz and improvisation.

The band’s repertoire is versatile, ranging from original music to traditional dances and songs of the Yiddish theater and Jewish ghetto – all with original arrangements. In addition to playing for concerts, the Tummlers also love to play for weddings, bar- and bat-mitzvahs, and other celebrations. Nancy is a wonderful dance teacher who is great at getting everyone up and having a good time. We also do school residencies; performing music, teaching dances and songs, and talking about the music, the Yiddish language, immigration and the Holocaust.

The Tummlers have toured in Germany where they performed to sold-out houses at the Hackesches Hof Theater in Berlin and at the ninth annual Festival of Jewish Culture in Chemnitz. We have also traveled to Lithuania and performed in Pakroijis, Linkuva, Kaunas and Druskininkai and were the first klezmer band to perform at the Skamba, Skamba Kankliai folk festival in Vilnius. Our most recent tour took us to Slovenia and Italy, where we busked in Venice before performing as one of the featured ensembles at the Festival “Ande, Bali e Cante” in Rovigo.