Join us for a concert featuring the music of Phil Acimovic performed by Julian Drummond.

Phil’s compositions has been performed by the Left Coast Chamber Ensemble, the Empyrean Ensemble, Chris Froh, and John McDonald. His music has been featured at new music festivals such as June in Buffalo, New Music on the Point, SICPP, and the Revision/s Festival.

Acimovic studied Javanese Gamelan for two years in Central Java. His main teachers are Bp. Wakidi Dwidjomartono and Bp. Darsono Hadiraharjo. In 2018 he conceived and managed a tour of a gamelan gadhon troupe from Java, giving concerts at 11 institutions across the U.S. He is a member of Gamelan Laras Tentrem and regularly performs with gamelan groups across the northeast U.S. He has directed gamelan ensembles at Smith College, Williams College, Tufts University, UC Davis, UC Santa Cruz, and the Mynah Music School. 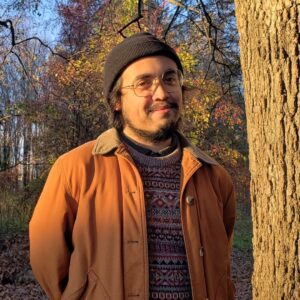 Julian Drummond is a pianist and gamelan musician based in Western Massachusetts. Having grown up surrounded by gamelan music, Julian has had the good fortune to learn from and play with outstanding Javanese musicians including Darsono Hadiraharjo and I.M. Harjito in performances and workshops across the northeast US. He finds work as a collaborative pianist at the University of Massachusetts and other institutions in the region. Julian’s mentors in piano include Armine Karapetian-Donato, Konstantinos Papadakis, Jonathan Bass, Nadine Shank, and Gilles Vonsattel. Julian has worn many hats as a pianist including as a piano teacher and a church musician, but he has also at different times found himself as a campus dining services worker, disinfecting a COVID testing facility, assisting in the maintenance of a sports arena, choir accompanist, and volunteering with an organization of unrepresented workers. A friend to all cats, Julian enjoys cooking and a stiff coffee.