Mark Neslusan, bass
Mark is originally from Oxford, Massachusetts, and earned a Bachelor’s of Music in composition from the University of Lowell in 1985. After attending graduate school at the University of Texas, Mark began teaching music at Bucksport in 1986. He’s taught vocal and instrumental music at all levels K-12. Mark has performed both jazz and rock music professionally throughout Downeast Maine for over 30 years. He lives in Bucksport with his wife, Cathleen, and his cat, Miles.

Brandon Kelley, guitar
Brandon is a Bucksport native, a graduate of Bucksport High, and a former student of Mark’s. Brandon is currently completing his Bachelor’s Degree in Jazz Performance at the University of Maine at Augusta. Brandon has been performing jazz professionally since 2016. He plans to pursue a master’s degree in jazz guitar in New York next year.

Haley Connor, soprano
Haley is a Bucksport native, a graduate of Bucksport High, and a former student of Mark’s. Haley is currently studying theater at the University of Maine. In addition to singing jazz, Haley has been acting in the theater since 2006 when she played Gretl in The Sound of Music. She has performed several lead roles throughout the years including the baker’s wife from Into the Woods, Olive from The 25th Annual Putnam County Spelling Bee, and Ariel from The Little Mermaid. Haley just directed her first play, Conflict by Wade Bradford, which earned second place at this year’s drama festival. 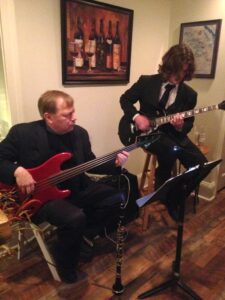