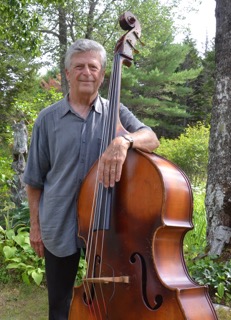 John Gallagher has been a fixture on the Eastern Maine jazz scene for several decades. Inspired by an uncle who was a professional bass player and a father who played sax and piano, he studied piano as a boy and developed a liking for Jazz at an early age.   In 1986 having acquired one of his uncle’s basses, he began playing bass seriously.

As a founding member, he has performed with the A Train Quintet for more than twenty-five years in a variety of local and regional venues. During his time as a member of the Patti Wicks Trio in the early ‘90’s he performed with many jazz greats of our time including among others, Cecil Payne, Clark Terry, Larry Coryell, Sheila Jordan and Greg Abate.  He currently performs in a variety of local venues with several groups and various guest artists.

John’s son Phelan, David Clarke and John have played together a number of times over the past decade.   Their material is based upon interpretations of jazz standards from the 1940’s to the present including compositions by Ellington and Strayhorn, John Coltrane, Thelonious Monk, Wayne Shorter, as well as Brazilian composer Antonio Carlos Jobim.   On occasion an original composition makes its way into their repertoire.