Leslie Anne Harrison and Frédéric Pouille met in Ireland over a decade ago and have been playing together ever since. Blue has called them “beautiful guitar artistry and major league fluting.” Balancing tradition with new ideas, Ryefield Cove draws from a shared love of Irish traditional music, Frédéric’s connection to French Breton music, and Leslie’s experience in the classical music world to create a distinctive sound within the flute and guitar duo. At Ryefield Cove concerts, you will hear new music written by Leslie, a French song or two sung by Frédéric, and many Irish and French Breton tunes. The duo released “Folk Ragoût” in 2011 and has performed at festivals and venues around the U.S. including Ceili at the Roundhouse Celtic Festival, Edgewater Celtic Festival, and the Maine Celtic Celebration. Leslie has recently released Volume I of Playing Outside the Linesthrough Mel Bay Publications, the first of a four-part Irish flute method book series. 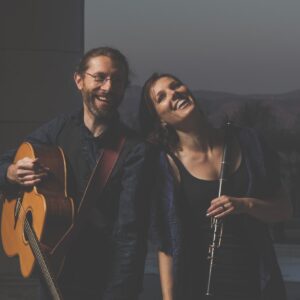